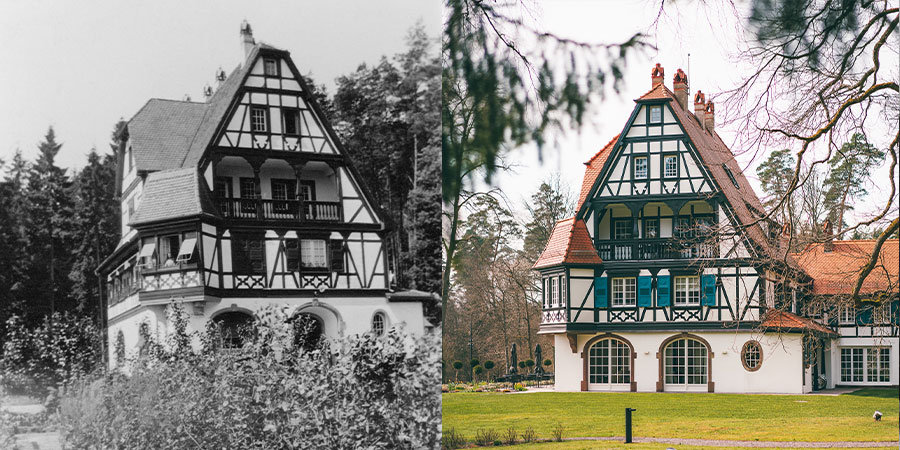 In 1920 glass artist and pioneer of Art Nouveau René Lalique settled in the little Alsatian village of Wingen-sur-Moder, where he built his family home. One year later, he built his glassworks in this same village. One hundred years later, the villa has become the artistic and gastronomic showcase of Lalique. The former residence houses a five-star hotel and a restaurant with two Michelin stars that is presided over by chefs Jean-Georges Klein and Paul Stradner. On the occasion of its centenary, Villa René Lalique is celebrating by organising a series of events throughout the year.

For the summer menu, which will be launched on 16 August 2020, Jean-Georges Klein and Paul Stradner have devised a special menu with a 1920s theme. The dishes are dedicated to the flavours of yesteryear, most notably the Perigord-style Bresse poulard with truffles, which has been recreated by the two chefs.

As a homage to the great artist, Villa René Lalique will also unveil a work of art created from chocolate and pulled sugar in a pioneering collaboration between pastry chef Nicolas Multon, who received the 2019 “Passion Dessert” prize awarded by Guide Michelin, and Josiane Ruez, model maker and designer, who specializes in the lost-wax technique used in the crystal manufacture – a bold partnership between the worlds of crystal and gastronomy.

In the forest park that surrounds the Villa, a backlit box adorned with crystal will house a creation in which the number 100 is formed from plants, which will evolve with the passing seasons.

The Hirondelles perfume bottle, designed by René Lalique in 1920, is re-issued in sapphire blue crystal, for a limited collector edition of 100 pieces.

Throughout 2020, Villa René Lalique will invite guests to celebrate this historic anniversary. Join us in the festivities when the Villa marks its 100th birthday. 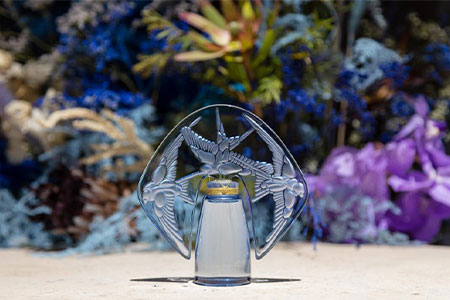 For the 100th anniversary of René Lalique’s Villa, the Hirondelles perfume bottle is re-issued for a Collector Edition

To celebrate the 100th anniversary of this mansion, the Hirondelles perfume bottle, designed by René Lalique in 1920, is re-issued in sapphire blue crystal, the colour of purity and freedom, for a Limited and Numbered Collector Edition of 100 pieces. 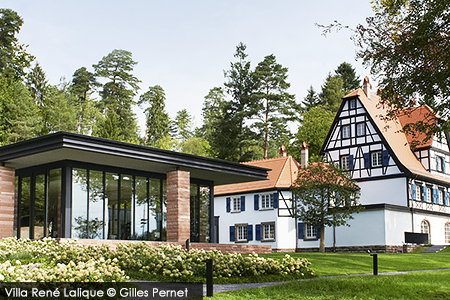 The Villa built by René Lalique in 1920 has reinvented itself. Under the direction of Silvio Denz, Chairman and CEO of Lalique, the Villa has been transformed into the sumptuous setting of an ultra-sophisticated hotel and gourmet restaurant.