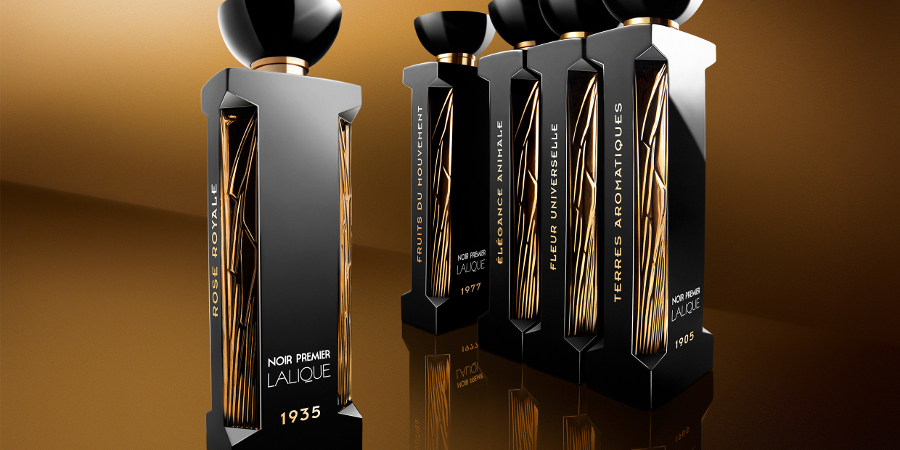 A visionary spirit. A tradition of innovation. A dynasty of pioneers. A forward-looking legacy…

Lalique’s history is closely intertwined with perfume, which inspired René Lalique and his successors, Marc and Marie-Claude Lalique, to create some of their most beautiful designs.

The Noir Premier Collection highlights the milestones of this history with five outstanding fragrances and an Exclusive Edition for Harrods. Six contemporary fragrances whose names and themes are inspired by Lalique’s legacy, full of boldness and modernity. Composed with peerless ingredients, these scents reveal novel facets of timeless olfactory families.

To showcase this collection, Lalique has selected a symbol. The very first black perfume bottle designed by René Lalique in 1911: the “Quatre Aigles” (“Four Eagles”) bottle. This bottle is adorned with four female figures finely sculpted on its edges. It lends the majestic design of its facing, forming the Roman numeral “I”, to the new Noir Premier bottle. A bold balance of the abstract and the figurative, the Noir Premier bottle is decorated with a graceful motif of wings engraved on the transparent glass edges. This motif is drawn from the “Cyclamen” bottle designed in 1909 for François Coty. Echoing this graceful design, the cap is engraved with Lalique’s “Swallows” emblem.

The bottle is presented in a precious black lacquer coffret, lined with sensuous imitation suede. The coffret is protected by a black cardboard overbox. This box is sheathed in a black and gold sleeve circled with a band presenting the name of the fragrance in the collection’s signature gold.

In 1935, René Lalique left the place Vendôme to open his new boutique at number 11 of the rue Royale, one of the most prestigious streets in Paris located between the place de la Concorde and the place de la Madeleine. Honoring the brand’s legacy but looking to the future, this iconic address is a vibrant showcase for reeditions of René Lalique’s masterpieces and contemporary pieces designed by the in-house creative studio.

To this majestic venue nestled in the heart of the Queen of Cities, Lalique has offered the Queen of Flowers: the rose, whose timeless beauty, like the beauty of Paris, can be endlessly rediscovered and reinvented.

Rose Royale enhances the fruity facets of a sumptuous rose absolute by underlining them with peach and osmanthus. This tiny, orange-hued flower typical of China gives off a complex, refined scent blending apricot nectar, powdery violet and velvety suede. These tactile, intensely feminine effects are softened by a breeze of musk, while the subtle leather facet of osmanthus absolute melts into sensuous Cashmere wood.

In 1905, a meeting took place that would change the perfume industry forever. Up to then, fragrances were sold in plain flasks, to be poured into precious, handcrafted and therefore costly bottles. The perfumer François Coty was convinced that each of his scents deserved “a perfect bottle with beautiful simplicity and impeccable taste”. René Lalique started out by designing labels, then stoppers for Coty’s fragrances. When Lalique discovered a process enabling him to produce luxury glassware in large quantities at an affordable price, Coty was able to achieve his vision at last… And thus, from their creative partnership, modern perfumery was born.

A tribute to the alliance of these two visionaries, Terres Aromatiques draws its inspiration from Coty’s mythical Chypre, composed by the Corsican-born perfumer with Mediterranean ingredients. Provence was also a source of inspiration for Marie-Claude Lalique, who took up residence near Avignon.

This garrigue-scented fragrance celebrates the most iconic aromatic herb of the South of France: thyme, bolstered with lavandin. An impertinent pineapple note and the green freshness of cardamom, brightened with lemon, add vibrance to the sun-drenched accord. With its fruity orange-blossom facets, freesia softens the heart notes. A woody ambery base, boosted by potent vetyver and the deep aroma of tonka bean – a blend of hay, almond and tobacco – rounds off this evocation of a land that has inspired perfumers for centuries…

While the whole world celebrated the dawn of the 20th century at the Paris Universal Exhibition of 1900, René Lalique reached the peak of his glory as a jeweler: he was awarded a Grand Prize, was decorated with the Légion d’Honneur and enthusiastic crowds rushed to admire his displays…

Lalique as a poet-jeweler had already revolutionized his art by exploring the full range of decorative possibilities offered by fauna and flora. But he was on the eve of turning to a new means of expression, glass, which he already used in his jewels. From 1910 onward, he would focus exclusively on this material. And, again, he would go on to trigger a revolution.

From glass to crystal and from crystal to fragrance, the passion for renewal that has always driven Lalique expresses itself through a variety of constantly reinvented designs, so modern they become timeless.

This quest for a beauty that transcends time is expressed in Fleur Universelle by the scent of the immortelle, also known as the everlasting flower because its blossoms never wilt. Its warm, spicy essence is the springboard for a new interpretation of chypre - an olfactory family born at the beginning of the Jazz Age which has never ceased to fascinate perfumers…

In Fleur Universelle, the warm-sand scent of the everlasting flower is set ablaze by rum and cinnamon and spiced up with cool pink pepper and a green flash of cardamom. Melting into the vanilla and liquorish facets of myrrh, into the Amaretto flavor of tonka bean and into the dark chocolate aroma of patchouli, the brown-sugar sweetness of immortelle becomes even more addictive.

Over three generations, the artists of the Lalique dynasty have drawn from fauna to invent their enchanted bestiary, each in their own style. More highly detailed for René Lalique, more streamlined for his son Marc… As for his grand-daughter Marie-Claude, she was initiated as a child into the family tradition with the glass menagerie fashioned for her by the craftsmen of the Lalique factory.
Designed in 1989, the Zeila panther is one of Marie-Claude Lalique’s most famous pieces. Caught as it is about to pounce, this quintessentially elegant creature is, according the Greek historian Theophrastus, the only animal that naturally gave off a scent so suave it attracted its prey.

In the top notes, saffron introduces the feline theme with a delicate whiff of leather. Peach evokes panther’s velvety coat. The bracing freshness of geranium conveys its energy. In the heart notes, the rose’s thorns offer a poetic evocation of its claws, while jasmine expresses its troubling sensuality… The warm, subtly smoky scent of gurjum, a rarely-used balsam, adds a hint of savage elegance. As the scent dries down, a delicate leather accord melts on skin, mellowed by creamy sandalwood.

When Marie-Claude Lalique succeeded her father in 1977, a wind of femininity and modernity blew over the house.

While René Lalique drew his designs, his grand-daughter sculpted hers in plastiline clay, working with live models. For instance, she bought a dove to observe the way it moved when she made her first crystal piece in the 1960s… Her innate sense of movement enabled her to breathe life and expression into the material. Her love for vivid colors, associated with the radiant transparency of crystal, gives her work a sumptuous vivacity.

In Fruits du Mouvement, the rich, playful hues of mandarin and prune translate Marie-Claude Lalique’s vibrant sensibility. The bite of black pepper and the burn of ginger enliven these nectar-laden notes and arouse the shimmering sensuality of an opulent jasmine absolute. When these quivering heart notes of flower and fruit grow languid, they come to rest on a soft bed of amber, sandalwood and Cashmere wood.

A sign of Lalique’s destiny appeared at the very outset of René Lalique’s career. From 1878 to 1881, the young artist went to London to perfect his drawing technique at Sydenham’s School of Art, housed in a spectacular glass and iron structure initially designed for the Great Exhibition of 1851… It was called the Crystal Palace.

It was in 1945 that Marc Lalique, succeeding his father, turned to the art of crystal-making. And thus, Lalique was reborn. In the aftermath of the war, almost nothing remained of the glassworks. Except what mattered most: the Lalique spirit. A tradition, a know-how, a will to innovate that drove Marc Lalique to develop what would become the house’s trademark: the contrast between transparency and satin finish, finding its ultimate expression in the purity of crystal.

Sculpteur d’Épices (Sculptor of Spices), Lalique’s Exclusive Harrods Edition, honors the legacy of these two sculptors of light. The fragrance emphasizes cool, pure notes to echo the radiance of the Crystal Palace where René Lalique perfected his skills, as well as Marc Lalique’s masterpieces, that look as though they were sculpted in ice.

In the opening, bergamot throws a sparkling light on an intensely faceted pepper, unveiling its full expressive potential. Bolstered by cool-hot cinnamon, pepper adds vibrancy to the heart notes, enriched with the noblest floral materials of the perfumer’s palette: rose and jasmine absolutes. In the base notes, Sculpteur d’Épices smolders in the amber glow of a labdanum, tonka bean and patchouli  accord…To showcase this fragrance, the Harrods Edition Noir Premier bottle is transparent. The fragrance’s name and associated date of 1945 are written in gold on a shiny black rectangle adorning the bottle’s facing.

Sculpteur d’Épices is presented in a precious black lacquer coffret, lined with sensuous imitation suede. The coffret is protected by a black cardboard overbox. The box is sheathed in a black and gold sleeve circled with a band presenting the name of the fragrance in the collection’s signature gold. 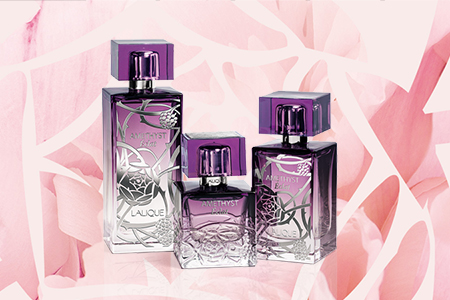 Amethyst Éclat sparkles with the pure, bright, exhilarating scent of peony – a flower the French writer Colette called “a blaze of petals” in For a Herbarium. Enhanced by exceptional ingredients and a refined presentation, Amethyst Éclat is a fragrant translation of the boundless creativity of the artist known as the Sculptor of Light. 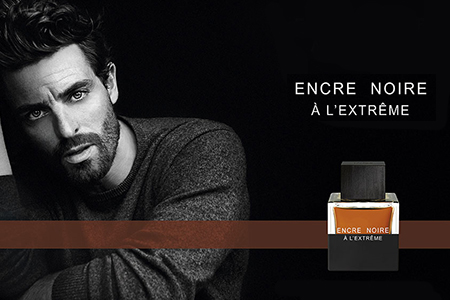 Encre Noire à l’Extrême pushes the olfactory proposal of the original fragrance to its limits. 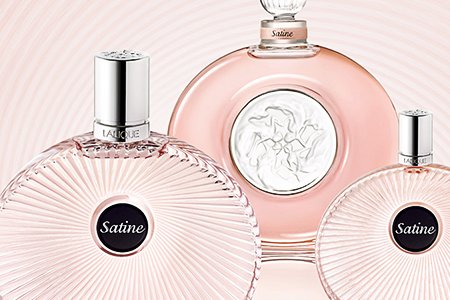 For its new feminine fragrance, Lalique has taken its inspiration from the fluidity, delicacy and sensuality of satin to sculpt a oman in its image and compose her eponymous perfume: Satine.